£14.90
Keep your workbench tidy and tools organised, ready for use with this 18-hole tool rack. The stand has 15 circular holes to accommodate screwdrivers and other tall cylindrical tools. There is then a secondary holder that would suit wider grip tools like pliers. Finally, the base of the stand also incorporates a tray, which is useful for organising screws and other fixings. The rack comes flat packed so requires simple screw together assembly.
Collection:
Accessories
Category:
Tools 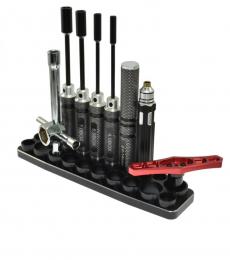 £12.90
A simple but useful accessory for your workbench. A machined aluminium tool stand with 20 holes of various sizes (14-22mm) to hold your screwdrivers and other work tools. Tools not included.
Collection:
Accessories
Category:
Tools 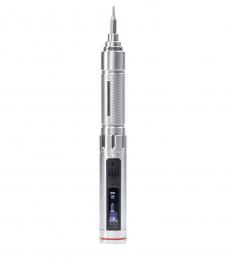 £89.90
The ES120 smart motion controlled screwdriver from e-Design is definitely one of those products that you don’t necessarily need, but one that you wouldn’t be without if you have it. For any serious drone builder or RC modeller, the ES120 could save you a surprising amount of time changing screws and generally fixing things. Built into the screwdriver is a 3-axis gyro, which detects motion, enabling you to control it with just a slight turn of your wrist. To use, simply press the screwdriver firmly against the screw, hold the power button and turn your hand slowly in the desired direction as if you are turning the actual screw. Turn it to the left and it will spin to the left, turn it to the right, and it spins right. The more you turn your hand, the faster it will spin which makes using it very intuitive. The screwdriver has five torque levels and an automatic mode where it will increase torque as necessary to turn the screw up until it reaches its maximum and then stops. The ES120 isn’t cheap for a screwdriver, but it’s certainty a quality product and addictive to use. It has a slim CNC'd 304 stainless steel body about the size of a marker pen, with knurled grip for comfortable holding. It’s also equipped with an OLED screen for a bright clear display, which shows the working status, battery level, and load of the driver. It has a built-in 300mAh battery for wireless operation and fully charged it will give up to 60 minutes continuous use, which is plenty for a normal day’s usage. Recharging it is straightforward, it’s USB powered so just plug it into a computer or phone charger. This is the upgraded version of the original ES120. This Plus version comes with 16 high quality alloy screwdriver bits, which include Philips, Slotted and Torx Hex’s. Note: The ES121 screwdriver has now been discontinued; the ES120 Plus is its replacement. The main difference is it uses a 1:144 reduction gearbox vs. the 1:64 found on the ES121. The no load speed is slower on the ES120 170rpm vs/ 380rpm, but it has more torque 2.5kgf.cm vs 15.kgf.cm so it's better suited to removing tighter fixings. Features: 3-Axis Gyro Enabled Motion Sensitive Control Clear OLED Screen Compatible with 4mm (1/8″) hex screwdriver bits Comes with 16x S2 alloy steel screwdriver bits including Phillips, Slotted and Torx Hex USB Rechargable with low voltage protection User customized configuration parameters (such as torsion, torque, etc) If you are looking for spare driver bits for the ES120, we sell this 24-piece set by TBS. The same company also make the ever popular TS100 Soldering Iron.
Brand:
e-Design
Collection:
Accessories
Category:
Tools 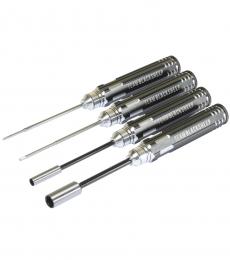 £13.90
Carefully crafted hand tools selected by TBS for all your modifications and repairs.  Heat treated for extra hardness. Anodized black because black is the only color we consider - ever.
Brand:
TBS
Collection:
Accessories
Category:
Tools 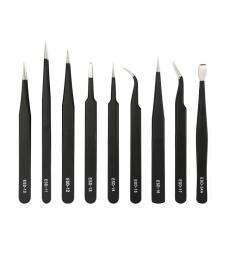 £11.90
This is a handy set of tweezers with an assortment of sizes and tips. It also comes complete with a canvas storage case. Each is electroplated with ESD coating, which is anti-static thus protecting the electronic components against damages due to static electricity. Tweezers are a handy tool to have when it comes to soldering those fiddly little header pins and awkward wires onto your flight controller and other electronic components. They can also be useful for short-circuiting bootloader pins. Features: Pack of 9 tweezers Different sizes and pointy shapes for multiple functions ESD coated for antistatic protection Made of nonmagnetic stainless steel Comes with protective plastic cases and a storage bag
Collection:
Accessories
Category:
Tools
£19.90
Say goodbye to a messy desk with this Heat Resistant Silicone Work Mat. The mat features a clear grid layout with tons of compartments and areas to store small parts. Numbered compartments will help you to remember the order of an assembly with ease. There are also slots for holding tools and magnetic sections to help keep track of tiny screws and make transferring them off of your driver a bit easier. The matt is made from a really durable silicone material that is heat resistant so you can use it for soldering work. Finally, the front edge has a metric ruler, which is handy for checking your antenna lengths and measuring wire. Be sure to check out our other tools & building supplies here! Features  Durable, high heat resistant, non-slip silicone Numbered compartments Tool holders 2mm slots - good for holding PCBs Magnetic compartments, collect small screws easily  3 lidded storage compartments Metric rule scale High quality, non-toxic, odourless material. Easy to clean with soap and water
Collection:
Accessories
Category:
Tools 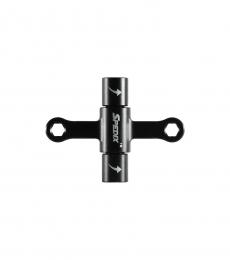 £13.50
This handy wrench from Spedix allows you to change M5 prop nuts with minimal effort. The socket rotates in one direction to allow you to continue to tighten or loosen without having to reset your wrench's position. Just crank away until the nut is tight or simply flip it over and use the other side to take a nut off.  The side arms give you great leverage to rotate the most stubborn locknuts. The arms also have M3 sockets to fit smaller locknuts.
Collection:
Accessories
Category:
Tools 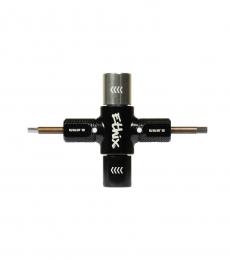 £14.90
Introducing the perfect field tool that you will carry with you everywhere.  Combining the three most common tools into one tiny and extremely handle little trifecta. Two 8mm prop nut sockets on opposing ends of silky smooth and robust redesigned one-way bearing system enable for quick and smooth prop changes. The silver side is for loosening and black side tightening. These 8mm hex sockets are accompanied by the most common of all FPV drone bolt sizes 2.5mm and 2mm hex drivers. This tool is all you’ll ever need in a pinch and will outlast your aircraft many times over. -Mr. Steele
Brand:
ETHiX
Collection:
Accessories
Category:
Tools 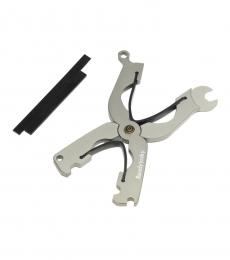 £14.99
You may have come across motor grip pliers before, but none as versatile as these. These lightweight aluminium pliers may look simple, but they are quite deceptive and feature a wide array of uses. Not only will they help make changing props effortless, they can also be used to locked SMA antenna connections, secure CCD camera lenses and remove / install switches on your radio transmitter. The most commonly used motors in FPV are covered by this one multi-use design. They are compatible with a variety of motors including; 2204, 2205, 2206, 2207, 1306, 1406 and 1806. The pliers are designed with a rubber strap to protect the beauty of your expensive motors while gripping the bell tightly to allow for quick and efficient prop nut removal. Say good bye to propellers biting into your hands while trying to hold the bell and prop while removing the prop nut...these pliers hold it for you.  Ever had a hard to remove lens cap on your FPV camera? The end of the pliers offer another set of teeth in the end of one handle that is design to grip the lens cap housing and allow for simple removal.   The motor grip pliers also feature a built in wrench made especially for antenna removal.  If your switches on your transmitter become loose in the field, no worries, these pliers have an adapter on the end made just for tightening your transmitter switches and keeping up with quick and simple maintenance.  Overall, this simple yet effective tool is designed for a wide array of uses and can help eliminate several tools in your flight pack just by having this multi use tool at your disposal.
Collection:
Accessories
Category:
Tools