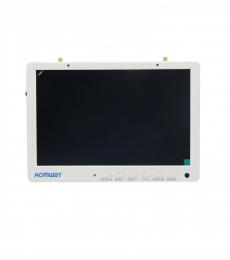 £190.00
The Aomway HD588 boasts the biggest screen size of all the FPV monitors we sell. It has a 10-inch display, which when compared alongside a 7-inch display is quite a lot bigger than it sounds. The large screen size makes the monitor ideal for those doing aerial photography and it looks professional too. The screen itself has a high resolution (1920 x1200) LCD display, which is bright and clear with good contrast. Also, it doesn't suffer from "blue screen" - a problem with many non-FPV monitors whereby if signal strength dips, even for a split second, the screen turns blue! When this monitor suffers from a signal interruption it just shows static and hence this feature allows you to fly much further without losing the image and potentially your drone! The monitor feature an in built 5.8GHz diversity receiver (Rx) making it FPV ready. A diversity Rx is essentially two receivers in one. In essence, this allows you two mix and match antennas for a solid video link. So it might be that you select a circular polarised omnidirectional antenna, which will provide good reception in all directions in the near field, and a directional high gain patch antenna for long distance flights. The diversity receiver is clever in that it will seamlessly switch between the receiver with the strongest signal. The RHD588's diversity receiver operates over 8 bands, including RaceBand and boasts 64 channels making it compatible with most FPV gear, including ImmersionRC, Fat Shark, Boscam amongst others. If you want to use the monitor to receive none FPV frequencies, there is an AV input and a HDMI input, so you could simply use the HD588 as an external display for other devices. In addition to the diversity RX, the HD588 has another useful function, namely a DVR. The built in DVR lets you record and play back your flight for you and your mates to enjoy over and over again. More importantly, the DVR could also be a lifesaver for your model. Couple your FPV setup with a OSD (on screen display) and if you lose your model, play back the video to get the GPS coordinates of the crash site. Note that the DVR requires a micro SD card to record footage (supports up to 64GB). The monitor can be powered from an external supply (8-26v) or from its removable battery. The monitor also features a 1/4-inch screw thread, so you can mount it to a regular photography tripod for best viewing. Included with the monitor are two antennas, 1 high gain patch antenna and a dipole antenna. PLEASE NOTE - The Joystiock button on the bottom right of the monitor isn't functional. Features: Very Large 10-inch High Resolution Display Support for 16:9 & 4:3 Aspecet Ratios LED backlight, Brightness: 450cd/m2, Contrast: 700:1 Built-in 64CH Diversity Receiver with Automatic Antenna Switching One Key Automatic Frequency Search Compatible with RaceBand No "Blue Screen" Due to Weak Signal Input Integrated DVR for Real Time Recording and Playback Rechargeable 11.V 2300mah Battery​
Brand:
Aomway
Collection:
FPV, Cameras & Gimbals
Category:
FPV Monitors

£19.90
This Aomway ANT009 is a high gain (13dBi) vertically polarized antenna designed to enhance the performance of your 5.8GHz FPV receiver for long range flying. The effective reception angle of the antenna is 40° vertically and horizontally. When matched with an Omni-directional antenna on your FPV transmitter you should be able to achieve up to 1km range using a 200mW transmitter. Features: Range enhancing upgrade Simple to use 13dBi signal gain Suitable for all 5.8GHz systems Supplied with semi-rigid connecting cable
Brand:
Aomway
Collection:
FPV, Cameras & Gimbals
Category:
FPV Antennas 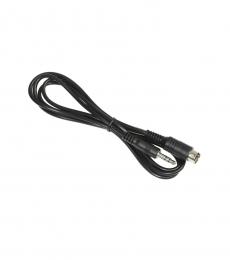 £7.99
This data cable can be use to connect FPV goggles with a head tracking function to the trainer port of compatible radios. We sell two versions of the cable, one with a JR Style 3.5mm barrel plug which can be used by JR / Spektrum / Taranis and another with a Futaba port. Please note your goggles must support head tracking to use this cable. We've tested it with Fat Shark & Aomway Commander V1/V2.
Brand:
Aomway
Collection:
FPV, Cameras & Gimbals
Category:
FPV Goggles

£14.99
Aomway is well known for making quality yet affordable FPV products. This latest antenna from them is a vertically polarized directional antenna designed for use on a 5.8GHz FPV receiver. Although most people will be better off using a circular polarized antenna, for certain applications a linear polarized antenna such as this one can yield a greater range. Linear polarization can provide extra range as all the energy is focused on a single plane rather that being dispersed into a cylindrical pattern. In order to get good reception with linear polarized antennas you need to ensure that both transmitting and receiving antennas are aligned to ensure the radiation pattern has maximum overlap. As the antenna is directional, the top tip of Y needs to face towards the transmitter.
Brand:
Aomway
Collection:
FPV, Cameras & Gimbals
Category:
FPV Antennas 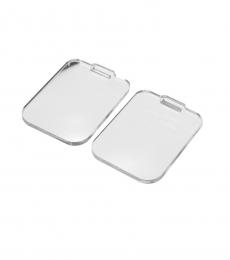 £9.90
These diopter lenses are designed to help correct for myopic (near sighted) vision (so suited for those who use glasses to see far away objects). We sell two strength of lenses, please select as required; -2 lenses: 200 Degree & -4 lenses: 400 Degree.
Brand:
Aomway
Collection:
FPV, Cameras & Gimbals
Category:
FPV Goggles 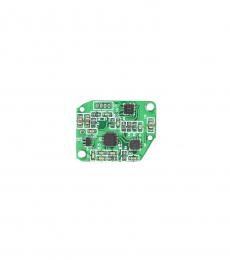 £44.99
Upgrade your V2 Commanders with this plug and play head tracker unit. The Aomway 2-Axis Head Tracker Module delivers smooth and accurate head tracking so that you can remotely control your FPV camera in pan and tilt for a really immersive flying experience. The unit is compatible with our 2 Axis Pan and Tilt FPV Camera Mount. This module also works with the commander V1 goggles.
Brand:
Aomway
Collection:
FPV, Cameras & Gimbals
Category:
FPV Goggles 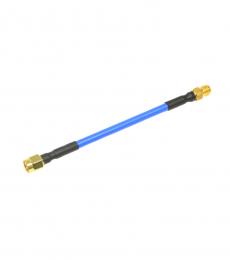 £4.50
The Aomway SMA Extension Cable with flexible center allows you to easily position your FPV antenna for optimum performance. The cable is flexible but remains rigid when left, it can be bent at a 90deg angle and still hold its shape. It is particularly useful for attaching patch or helical antennas to FPV goggles with horizontal SMA outputs. Both SMA & RP-SMA versions are available.
Brand:
Aomway
Collection:
FPV, Cameras & Gimbals
Category:
SMA Adapters
Barcode: